Could a roaming robot assist in healthcare setting? 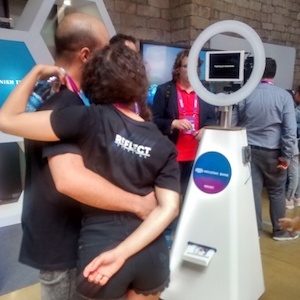 It can roam in a crowd discreetly. Its demeanour is friendly and approachable and it can engage with passers-by, inviting further contact through taking and delivering a photograph.

Selfiebot is a six-foot tall events robot that, with the aid of 3D sensors, autonomously navigates its way around a peopled environment. An AI-powered conversational interface makes ‘conversation’ possible like a chat box or voice assistant.

“We have had a few requests from hospitals and retirement homes about our robots. It is something we are considering if we get more interest from that sector,” Selfiebot creative technologist Enrico Penzo told Healthmanagement.org at Reflect Festival in Cyprus where the friendly roaming robot appeared in May.

The company has several robot types in operation; in addition to Selfiebot, there’s Selfiebot Vox, which is designed to mingle and interview the crowd, video recording responses.

Penzo explained that, to date, the company’s robots have mostly been used at tech congresses, red-carpet events and even weddings.

“The purpose of the robot is to amplify the event beyond the physical space – so brands can have users at an event to share on social media. It’s a capture tool for lead generation but it’s also a nice way to give people a memory from the event itself. The robot can send pictures via email and SMS and it reaches you in real time.”

Selfiebot was one year in R & D and progressed through seven prototypes before its current form. “We are keen to shape the products in response to customer feature requests so we are constantly improving Selfiebot,” Penzo said.

The concept of robots being deployed in a healthcare setting is not new. A physician-team, the Personal Robotics Laboratory at Imperial College London and the Department of Psychology, University of Westminster in the UK have been trialling ‘Junior’, an NAO robot that aims to lessen ward patient isolation by chatting and playing music.

Hanson Robotics, the creator of star robot Sophia, have said that humanoid robots are suitable for service industries and will work alongside human beings within 20 years.

Want to work alongside a start-up with great energy?

HealthLink and Konnect NET to merge to form Clanwilliam Health